The KUHN Knight RC 3120 is the newest addition to the KUHN Knight reel mixer lineup. Available in truck mount configuration, the RC 3120 boasts a mixing capacity of 1,200 ft³, making it the largest reel mixer offered by KUHN. The large mixing tub features the famous Helix reel, providing fast, thorough mixing of a wide variety of already processed materials. A new mixer drive configuration provides unmatched automation and capabilities through sophisticated software, while KUHN’s new truck controls provide operators with simple control over the new system. The RC 3120 not only has the brains for next-generation cattle feeding, but also possesses the brawn necessary for demanding applications. No chains and sprockets are used on the RC 3120 drive, only heavy-duty planetary gearboxes used on vertical mixer augers and concrete mixers. - Less

Fields with asterisks* are required. Please email our helpful staff with any questions or comments using the contact form.

Send to a friend »

Send To A Friend

Fields with asterisks* are required. Your friend will receive an email that contains a reference to this page. Please send this email only to people you know who would be interested in this information.

The full gearbox drive on the RC 3120 mixer eliminates the need for chains and sprockets in the drive system. Eliminating chains and sprockets removes multiple wearing items on the mixer drive. Eliminating chain and sprocket drives also enables split, independent control of the horizontal augers and reel. With the gearbox drive, a customer gains simplicity of reduced drive components while also increasing options for further control of the mixing process.

Drive components on the RC 3120 are built to last in high-use applications. Each auger is driven by a planetary gearbox similar to the planetaries used on the VT Vertical Mixers. The reel drive planetary is one of the highest rated gearboxes in a planetary line that is used predominantly in concrete mixer truck applications. The drive components on the RC3120 are comparable to bringing a twin auger vertical mixer and a concrete mixer together and combining them in one machine!

The Helix reel has a robust build and has been thoroughly tested to withstand the most challenging conditions. The design of the reel crossbars evens the pressure across the length of the reel for smoother operation. It also engages with the feed more smoothly.

A mix bar runs diagonally across the center of the reel to help ensure consistent feed movement throughout the entire mixing chamber. The reel crossbars keep feed moving efficiently around the outside of the chamber. The secondary mechanical mixing action from the mix bar provides a fast and thorough mix even in wet, heavy rations with large amounts of distillers grains.

Improved, easy to use truck controls provide operators with a comfortable, simple operation solution. The RC 3120 offers increased capabilities while at the same time becoming simpler for the operator to run. The in-cab display portion of the updated truck controls allows operators to monitor machine performance and detect any issues that may arise. Through the display, managers can monitor machine use for maintenance purposes, have an assistant to troubleshooting any issues, and adjust automation settings.

Offering separate, direct drive of the augers and reel provides new opportunities for automation in the RC 3120. Automatic loading mode can be used to automatically turn the augers and reel on and off, saving on mixer wear and fuel usage. Mix counter functionality can be set up to turn off the mixing components after a designated time of loading the last ingredient. When unloading, the augers can be controlled independently of the reel as well to place precise amounts of feed and reduce machine wear and fuel use.

The reel thoroughly mixes rations gently without causing excessive damage to the feed ingredients, preserving precious nutritional value for your herd. The large reel gently lifts material up into the side augers for excellent side-to-side movement. The upper auger moves material rearward, while the lower auger moves material forward for end-to-end mixing. This helps feed continually charge the door during discharge.

Quality performance, with the lowest possible input costs is the goal of every operation. The fast, gentle mixing of KUHN Knight reel mixers helps maximize efficiency and minimize expense. The reel and auger design eliminates much of the force and pressure seen with other mixer types, resulting in low horsepower requirements and, correspondingly, less fuel consumption for economical operation.

KUHN Knight reel mixers provide a consistent mix, even with small batches, for a balanced ration from beginning to end. Their quick, even discharge with a more complete cleanout helps save time and maximizes efficiency.

With a high discharge point, these mixers allow for the use of a simple slide tray in most feeding situations. The long tray makes it easy to feed deeper into most bunks while preventing feed loss from the wind. This dependable, low-cost option also results in less maintenance. 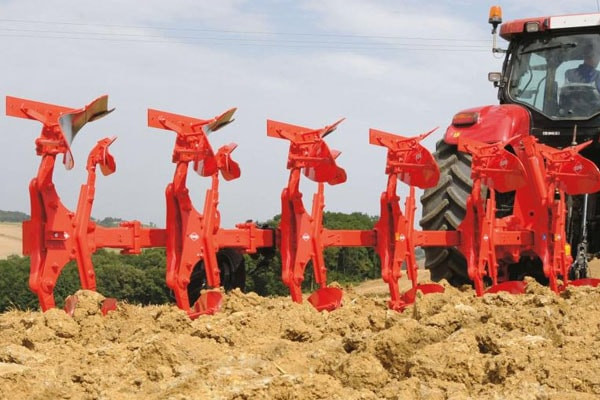 Let us help you get moving.